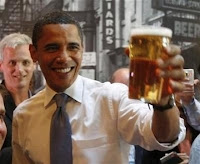 Here's to President Obama and his brave and wise staff who understood the power of mediation this week as he invited the Harvard Professor to confront and discuss his arrest with the Cambridge Police Chief at the White House. There were so many mediator techniques brewing that afternoon, that I wanted to take a moment to reflect on them. First, there was an invitation for dialogue. There were no guarantees that there would be a particular outcome, but in the heat of the conflict, somebody had the wisdom to bring the conflicting parties together for the purpose of discussing their different perspectives and exploring options for improving the relations between African Americans and Police in America in the future. Second, there was a "third sider" present: not necessarily Obama, who actually took sides when he called the Cambridge Police Officer's conduct "stupid", but Joe Biden--who had no dog in the fight. (You'll notice that Biden did not drink alcoholic beer. Interesting, but maybe not coincidental.) Third, there was a balance: two African-American Harvard trained participants would not have achieved the level of impartiality that a true mediation would require as against a single, Caucasian (probably not Harvard trained, Ivy league, elite?) Police Officer. Although a mediator need not be a separate race from the disputants, in this case, the commonality of Obama with one of the disputants would likely have raised eyebrows had he been alone to face the Police Officer after calling his conduct "stupid" in a press conference. Fourth, they offered confidentiality: although the Press was invited to take the initial irresistible photos, they were expressly excluded from the dialogue itself. The parties were then at liberty to express their interests and perspective without risking losing face or conceding anything concrete. Finally, informality: have you seen other photos of such an informal meeting with the President of the United States? Obama was in shirt sleeves, without jacket or tie, at a table on the lawn. The table was round (not a true "summit") and the dialogue was not recorded. All of this facilitated the true dialogue that perhaps will begin or advance the discussion of racism in America. Bravo for the mediators!
Posted by Jan Frankel Schau at 9:41 AM

In many instances, a Mediator must remain "mum" and the process somehow appears like "magic". This is the chance for transparency, stories, techniques and even bloopers. I hope that in following this, you will gain some insight into the process of mediation, and perhaps even enjoy my self-reflections!

Important Links of Friends in the Business

Welcome to my Mediation Blog. Here, I shall muse and reflect upon the implications and possibilities I see for mediation of disputes large and small from my cozy desk on the "left coast" of America. As the former President of the Southern California Mediation Association, I am privy to all kinds of interesting challenges, and I hope I will not only impart my insights here, but gain some valuable feedback from you, my readers as well. We're all in this ship together folks!